Buckner Homestead Heritage Foundation
Promoting the care and preservation of the Buckner homestead, orchard, and community Atmosphere in perpetuity.

A GREAT WEEKEND IN STEHEKIN!


What a great weekend!

Orchard Centennial Kick-0ff - With a full house at the Golden West Lodge, the Kick-off to the Buckner Orchard Centennial was an over-whelming success. Thanks to the tremendous work of Adrienne Carpenter and Christine Sargo, the 95 attendees were provided personal and entertaining insights to the people and life at the Orchard over the past 100 years. Displays of historic photographs, personal letters to and from the Buckner Family,artifacts, and anecdotes shared made for a extraordinary evening. (Photos - thanks to Rick Beauchesne, Crystal Austin/Crystalviewgraphics, and Herb Sargo). For further information, check the History Note in the previous posting.

2nd Annual Harvest Fest - Bracketed by beautiful fall weather, Harvest Fest avoided the heavy rain of Friday and Saturday evenings for another great day of picking apples, making cider, and community potluck while enjoying the music of Stehekin's own, End of the Road.

Pictures are worth a thousand words, so please enjoy the creative and captivating work of Mike and Nancy Barnhart/Barnhart Photography, Crystal Austin of Crystalviewgraphics, Rick Beauchesne, and Herb Sargo. Many thanks to all for sharing these with us.

Wilfred Woods has, again, captured the spirit of the weekend in his Talking it Over column on the front page of the Wenatchee World. Thanks, Wilfred!

Many thanks to the many,many people who made both of these events a success!
Posted by Buckner Homestead Heritage Foundation at 11:42 AM No comments:

Join us at this drop-in open house featuring historic photos, letters and reminiscences, artifacts, Olive's applesauce cake and beverages, and more as we kick-off a celebration of the first 100 years of the Buckner Orchard.

History Note
The property that now comprises the Buckner Orchard was homesteaded in 1889 by Bill Buzzard. After clearing about an acre of land, Mr. Buzzard built a log cabin, which is still standing today, and planted a large garden. He also cut many of the large trees on the homestead and sold them to mills downlake or as firewood for the steamers.

In November of 1910, Bill struck a deal with William Van Buckner to sell the homestead for $5,000.00 or $50.00 a month for the rest of his life. Bill took the monthly payments, "knowing his weaknesses - gambling and moderately heavy drinking, which in combination might be fatal to his $5,000.00".

In April of 1911, the Buckner's arrived in Stehekin with fairly elaborate plans to develop what they always called Rainbow Ranch. Apples were their focus and the first thing needed was water. The hand-dug ditch still carries irrigation water to the orchard today.

And, thus, began 100 years of the Buckner Orchard as a jewel and source of community pride in the Stehekin Valley. 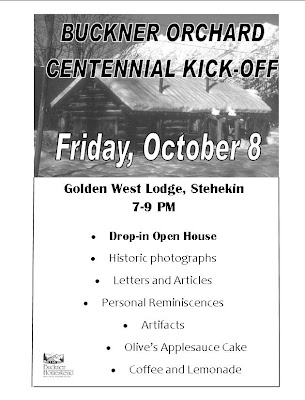 Posted by Buckner Homestead Heritage Foundation at 11:27 AM No comments: 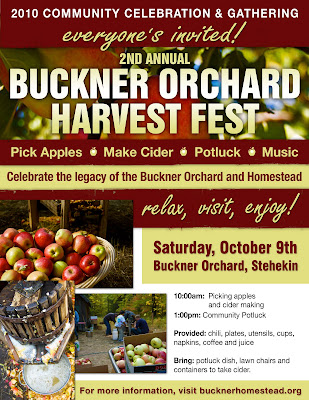 Posted by Buckner Homestead Heritage Foundation at 3:43 PM No comments:

GREAT WORK DAY AT THE ORCHARD 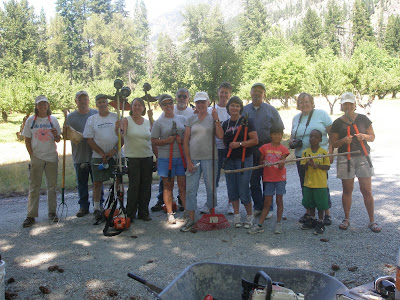 Fourteen adults and two very enthusiastic youngsters accomplished much to be proud of on an unadvertised work day at the Buckner Orchard on Monday, July 26.

Anchored by a large contingent from Walla Walla, ditches were cleaned with weed eaters, and encroaching seedling pines and cottonwoods were removed from Buckner Lane, the main irrigation ditch, and the pasture. Significant weed eating around young and old trees to reduce mouse habitat took place over two days, with the return of two very dedicated "weed eaters" for a second day.

Additionally, summer pruning of water suckers and the cleaning and removal of vegetation and roots help ensure a better flow of water to the orchard for the remainder of the season.


Long-time member, Ray (Toad) O'Neal of Chelan recently announced his retirement from the Foundation board. Toad is the last of the original board members and will be sorely missed. His ability to get things done in the community, bring humor to our discussions, and to provide a history of both the Foundation and the Stehekin Valley were very much appreciated. Thank you, Toad!

Newly-elected to the Board is Brun Garfoot of Stehekin who brings an unique perspective and passion to the Foundation Board. The son of Wendy and Phil Garfoot, Brun grew up at the Buckner Homestead, living in the Buckner House, and currently resides in Stehekin with his wife, Mindy, and their children. Brun carries on another family tradition, his mother, Wendy, was a long-serving original board member.

Thank you, Toad and Brun, for your willingness to help further the work of the Foundation in supporting and preserving the Buckner Orchard and Homestead.
Posted by Buckner Homestead Heritage Foundation at 9:45 AM No comments:

SECRETARIAL - Jo Anne
Approved minutes of July 22, 2009 board meeting in Stehekin
Read two items of correspondence
Approved incorporation of on-line board voting in minutes of this meeting

FINANCIAL - Cinda
Treasurer reported on 2009 and 2010 to-date, current balance = $14,177.45
Adopted budget for 2010
Approved use of Pay Pal for one year for on-line memberships, donations, and Adopt-A-Tree
Approved IRS-mandated policy on disbursing of funds if Foundation dissolves
Approved change of fiscal year to align with membership year, Jan. 1 - Dec. 31

ELECTIONS
Approved election cycle for the Board
Re-elected Cinda Gilbert and Herb Sargo to the Board (3-year terms)
Re-elected (1-year terms)
Herb Sargo, Sedro-Woolley, President
Cinda Gilbert, Manson, Treasurer
Jo Anne Reiter, Walla Walla, Secretary
Ray (Toad) O'Neal has retired from the board and will be sorely missed. His replacement was discussed.

GOALS for 2010 (adopted)
1. A minimum of 100 people will attend the Annual Harvest Fest
2. A minimum of two Foundation-sponsored work parties will be held to support the orchard and homestead
3. A minimum of at least one interpretative project will be undertaken in 2010 in collaboration with the NPS and other appropriate organizations
4. Obtain funding from an outside source(s) for a minimum of one priority project

REPORTS
Orchard and Homestead - Laurie
light winter with minimal snow and elk damage - all in good shape
Recently acquired brush flailer is working, with some notable quirks that will be addressed
No expansion of the elk/bear fence will take place this year
May be a lighter crop this year - quite heavy last year
Boy Scouts may possibly do service projects at the Homestead


Incorporation and Nonprofit status - Herb
Incorporated in State of Washington as of January 2010
Variety of polices will need to be adopt as a part of IRS 501 (C) 3 application
At some point, we will need to secure professional assistance, i.e. an attorney or nonprofit specialist

PLANNING DISCUSSIONS
Harvest Fest and Buckner Homestead Centennial
Approved Centennial celebration for evening of October 8 and planning committee formed (will be expanded)
Reviewed inaugural Harvest Fest (2009) and began planning for October 9, 2010
Work days were discussed with late July and prior to the Harvest Fest in October most likely
Future external communications were discussed regarding our role, mission, and working relationship with the NPS
Discussed possible interpretative enhancements at the packing shed and Buzzard cabin
Posted by Buckner Homestead Heritage Foundation at 9:08 PM No comments:

The 2010 Foundation annual meeting will be held at 7 PM on Monday, May 10 in the Board Room of the Lake Chelan Reclamation District in Manson. The tentative agenda includes:

· Setting Goals and Priorities for the year
· Planning for Harvest Fest and the Buckner Homestead Centennial
· Work days at the Homestead
· Election of Officers
· Election of two board members
· Adoption of election cycle
· Membership and Finances
· Update on incorporation and nonprofit status
Posted by Buckner Homestead Heritage Foundation at 8:23 PM No comments:


Protection for more of the Buckner Orchard trees coming in 2010.

National Park Service plans are in the works to expand protection of the orchard from bears, a traditional threat, and from the more recent and growing elk herd. The weight of bears climbing and pulling to "harvest" apples in the fall has become even more of a danger as trees become brittle with age.

Elk cannot only denude a tree of new and young growth, but also break limbs and leaders when attempting to reach farther up the tree.

Approximately one-fourth of the orchard is now protected with a tall hog-wire fence, supplemented by a solar-powered electrical line. Even with this 8' fence, elk have, during deep snow, been able to leap the fence, creating a need to shovel snow away from portions of the fence.

In the spring of 2010, the NPS plans to fence the portion of orchard between the packing shed and the currently fenced trees. Work will involve creating post holes, mixing cement, placing poles, attaching wires, constructing gates, and adding the electric fence.

In addition, a semi-temporary electric bear fence will be installed on the remaining orchard, those trees in front of the homestead house, from the pasture to the packing shed. This fence will be composed of a single fabric wire strand between low fence posts, which can be easily dropped or removed. This fence will be utilized during the "bear season" in the late fall.

The NPS has applied for a Washington Conservation Corp grant that would provide WCC workers to construct the fences, but word has not been received as to whether or not the grant has been funded. If not granted, volunteers will be needed to complete the fence installation.

No longer the working ranch it once was, the Buckner Orchard is now haven to a small herd of deer; and bear and elk find the ranch more inviting without the activity, dogs, hunting, and work that were once the norm for the Buckner Family.
Posted by Buckner Homestead Heritage Foundation at 10:29 AM No comments:

Your support of the Foundation is critical to the care and preservation of the Buckner Homestead and Orchard. Membership in the Foundation, Adopt-A-Tree, donating to fund specific projects, and volunteering are all ways that individuals, groups, and businesses can join in this effort.

January is our memberhip month, with a wide variety of categories for enrollment. Membership in the Foundation is simply another means by which you can contribute funds that directly benefit the Homestead and Orchard and participate in the organization. Download a membership application now. (click here)

Please join us today!
Posted by Buckner Homestead Heritage Foundation at 9:04 AM No comments: